Enjoy a superb weeks guided walking holiday in the Alpujarras

These week long hiking tours in the Alpujarras are based at Casa Ana in Ferreirola. Run by Chris Stewart, writer of the famous travel book "Driving Over Lemons"

The Alpujarra is one of Spain’s most spectacular and unspoilt walking areas, with hikes in the Sierra Nevada mountains, and rambles through the meadows, orchards and white villages.

The holiday is based at Casa Ana, a gem of a guest house on the edge of Ferreirola, with magnificent views of the Trevelez river gorge. The house recently featured in the Times top 50 places for a holiday in Spain.

And who better to guide you than Chris Stewart, author of “Driving over Lemons” and himself a keen walker. Chris invites you to explore the area and share his deep knowledge (and great stories) about the history, culture and nature of the Alpujarra. Chris is available on 4 or 5 weeks per annum.

The walking groups are small so early booking is strongly recommended. 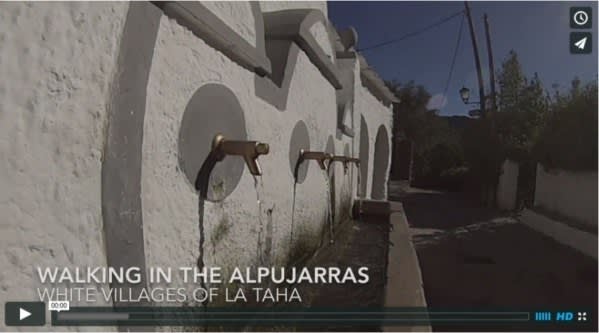 Expect altitude gains of about 350m and 6-7 hours of walking per day.

Choice of walking grades: (What do these grades mean?)

What Chris Says about the Week

Ferreirola is about the prettiest village in the western Alpujarra, and that’s where the enchanting Casa Ana is to be found. It’s just up the hill from our farm. I can promise you that the food and wine will be of the best. The ambiente and conversation? Well that’s up to me and you! What we plan is some walks around the Alpujarra – nothing too tough, although it’s steep country, so you ought to be in tolerable good shape. A day in Granada with a gourmet lunch at one of the city’s best known restaurants and some mooching round the bars and bodegas of the mountain villages

It does not include: flights, airport transfers, tickets to monuments (eg. in Granada), one lunch, some refreshments eg. coffee stops on walks.

Can't make one of Chris's weeks? Dont worry, we run similar Walking Weeks on Demand from September to June inclusive each year, guided by Spanish Highs.