An alpine ridge that gives a great mountaineering experience

Ian Tupman, describes one of his most memorable adventures here in the Sierra Nevada 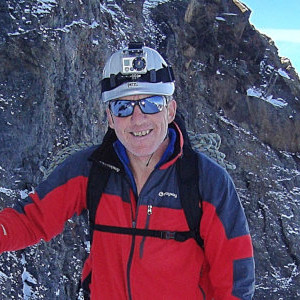 I had done some scrambling and low-grade rock climbing in the past but as a non-climber, I was uncertain as to whether the Raspones ridge was within my capabilities. In November 2012 I would find out, when I was invited to join a Spanish Highs team.

Our group was seven strong with a multi-national flavour and of mixed abilities. We set off late morning on Friday 23rd November from just below the Hoya del Portillo and walked in along the acequia alta, stopping at the Poquiera refuge for our lunch break. From there, we crossed the Río Mulhacén and traversed around the massive bulk of Loma Pelada to arrive at our camp for the night at the base of the Raspones ridge and next to the Río Seco.

By the time we had set up camp there was still an hour of daylight to be had and three of us ascended the Puntal de Terreras Azules (2,804m) via the ridge which forms the southerly extension of the Raspones. With the sun setting to the west and the valleys below filled with cloud, it was one of those ‘never-to-be-forgotten’ moments when we reached the summit cairn. We completed our return to the tents by the light of our head torches and after our meals we turned in for an early night.

Breakfast taken and our preparations made, we set off around 8.30am and climbed to the southern end of the ridge. Two of our party would stay there and photograph our progress with the rest of us proceeding on two ropes. Jens led the first rope with Javier and Felipe. Sieto and I followed on the second rope. The weather forecast had been for cloud with light to moderate winds but we had blue sky and hardly a breeze. The conditions could not have been better.

The initial section is similar in nature to the Cuillin ridge on the Isle of Skye but with noticeably more dubious rock; however, we found sufficient natural protection as we proceeded northwards. In places the exposure is breath-taking with precipitous drops to either side.

The initial section of the ridge [photo: Richard Hartley]

There was more snow than I had expected but it was generally soft and not very deep so the crampons stayed in the bag for the time being.

The first rope made quick progress ahead of us and it became clear to Sieto and I that we would be holding up the other three if they kept waiting for us. We had almost reached the half-way point but it had taken us the best part of three hours and with harder climbing ahead, we calculated it would have been dark by the time we walked back out to the cars. We discussed how we were both feeling and our options. We had a seemingly escapable gulley immediately to our right which would bring us to the base of the east side of the ridge and so we informed the others of our decision and wished them luck as they moved off to gain the highest part of the ridge.

Jens, Javier and Felipe topping out on the Red Tower [photo: Richard Hartley]

Meanwhile, Sieto and I looked down the gulley but, as we couldn’t see the bottom, we weren’t sure whether the rope was long enough to get us onto safe ground. I spotted a rock projecting out of the snow approximately fifteen metres below us which appeared to be a potential anchor point. We put on our crampons and I belayed Sieto from a convenient rock at the top of the gulley as he down-climbed to investigate further. After much prodding and pulling, Sieto declared the rock was good enough for a belay and so, totally committed, I removed the top belay and down-climbed with Sieto protecting me from below.

The snow in the gulley was soft and varied in depth which made front-pointing slightly awkward at times. With us both safely attached to the lower belay and with more experience than I, Sieto set up the abseil which we both checked. As it turned out, the rope would have reached the bottom of the rocks from the top of the gulley but we couldn’t have taken the chance. From where we were now though, the rope crossed the steep slope at the base of the gulley and would get us onto relatively level ground. I descended first and enjoyed the cool air of the gulley after being in the sun on the ridge for over three hours. Sacrificing some cord and an old karabiner, Sieto followed and we packed up and headed down into the valley and back along to our camp.

Our two companions were waiting for us and the other three returned shortly after, elated at their achievement. We struck camp and walked out to the cars; a long day but a satisfying one.

The Spanish Highs team safely back at the cars

In summary, I was initially disappointed that Sieto and I hadn’t completed the traverse. On reflection however, I had been at the upper limit of my comfort zone at times but I had enjoyed the challenge and the experience. The decision we made to bail out was measured and was free of any machismo which can so often lead to trouble in such situations.

Would I go back and complete the traverse? Definitely, but over three days rather than two. This will give more time on the ridge and a relaxing walk out on the third day.